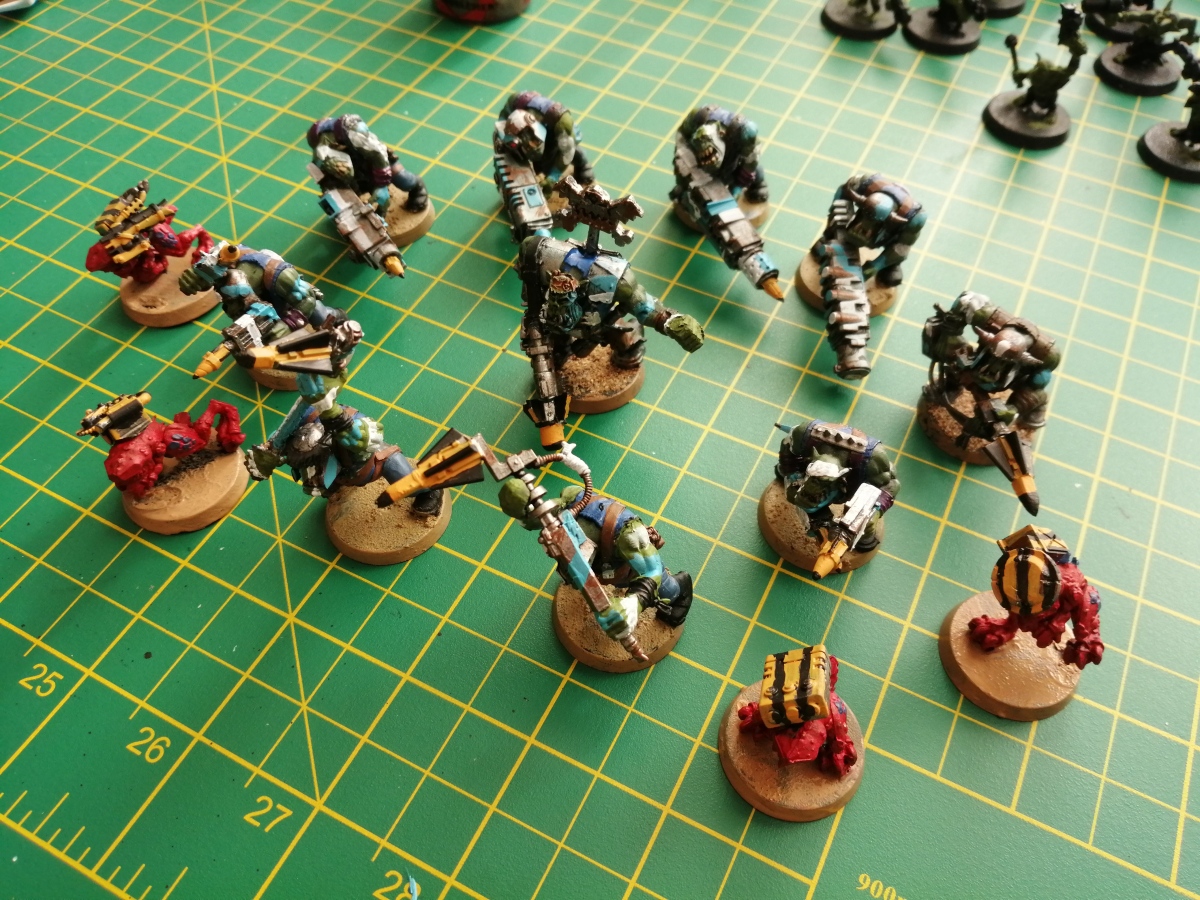 On Saturday, you’ll see that we uploaded a little sneak peek of a modelling project I’ve been working on. I get these into my head every now and again. I absolutely love warhammer and lately I’ve had a lot more time to be able to commit to the hobby; as such I’ve been opening my Bitz Box and upgrading my Orkz!

The idea for this build was to make myself some Oddboyz; the Ork specialists who fill in the gaps in your army and allow you some more tactical flexibility, which I love. I looked at my options and there was a massive hole in my anti-armour capabilities for my Orks, so I took a look at buying some Tankbustas, only for my wallet to run away screaming when it found out that they were 25 British Pounds for five…merely half the number I wanted.

So I scoured my horde of Boys, did some likely recruiting and decided to arm them with some Kustom Dakka. It must be said that I did have to strip the unit of 5 Flash Gitz that I have never fielded to the table, but those Freebootin’ Gitz aren’t my style anyway, oh and one of them is now my Warboss (You’ll have to wait and see for him!)

For this build I utilised the above, some cold-weld plastic glue, superglue for the resin bitz, a few WarmaHordes gribblies as counts-as squigs, my trusty pliers and my craft knife. Now I’ll show you the result and talk a little bit about ’em!

We’ll start with the Boss nob for the unit; he’s now looking stylish with a new Rokkit Launcha arm, old-style bosspole from a painboy past and a dangerous looking waspy rokkit to scrag ‘oomy tankz.

This brave Git is one of two I made, he’s armed with a Kustom Tankhammer I made from a heavy ThunderHammer. The Rokkit attached to the end is an upturned power-mace with a sprue tip – tasty!

Look at these cute and deadly little fungus-dogs. We’ve strapped some suitably dangerous-looking SquigBombs to their backs and trained them to run towards Tau Tanks. The Bomb Bitz are made from cut off SnazzGun bitz, a Tau Missile Pod and a Tanbusta Bomb. I’m proud of these little fellaz!

Who deasn’t love Rokkit Pistols?? I conveniently had two Boyz who had been converted previously with two Sluggas, so I didn’t have to do much to these guys to get them looking the part, the Rokkits are from the Flash Gits’ Snazzguns again, so much potential in that kit.

This Lad has a storied history, I originally got him with a Rokkit Launcha that I converted into a Big Shoota. Now he’s back where he wants to be with another inverted powermace Rokkit!

These are the rest of the Tankbustas, just armed with Rokkit Launchas converted straight from the stripped down SnazzGunz. Don’t tell the Freebootas that we Nicked their Gubbinz!

So there you have it, a unit of 10 Tankbustas, salvaged and cobbled together in true Ork Fashun from Bitz and Know-Wotz for less than the price of a second class stamp. I’ll be throwing them towards very large vehicles whenever I can. They can deal out a whopping 200+ wounds in two turns thanks to Ork Stratagems. I cannot wait to see the look on an intrepid Titan-commander’s face when my Gitz Skrag his Shiny!

I’ll be uploading another mini-project next week, so stay tuned!

P.S. As a disclaimer, I know my painting is bad, these were rushed to make them look atleast fieldable, I will eventually clean them up!

One half of the dynamic Steadman Society duo! I am a reading and writing machine, ready to hoover up all knowledge and spit it back out with a (hopefully somewhat interesting) creative twist! I also design games! View all posts by John Steadman

The content of each post on this site is owned wholly by their respective author and no person or organisation may use any part of the content of any post without the express permission of steadmansociety.com or the author in question.